HALLsmall
What better time to refurbish the Sports Hall?  With coronavirus meaning the space has been unused, and no problem for social distancing, we have organised a great surprise for when the children return!

Leonard V (Y4) performed at the Norfolk County Music Festival on Tuesday 10th March. He played a lovely trumpet duet with his teacher and received resounding praise – see this clip of his potential:

‘Out of this World!’ was the title of today’s musical extravaganza at Uppingham School.  We were transported to outer space with a final performance by 280 young instrumentalists. Sixteen prep schools gathered together and once again Beeston were given a special mention for travelling the furthest!

The children were led by Uppingham’s talented team of visiting music staff and inspired by the senior school’s Jazz band who really raised the roof of the Memorial Hall.  After a full day of sectional and tutti rehearsals the children performed in a concert including ‘Sprach Zarathustra’ by Richard Strauss, ‘The Planets’ by Holst and ‘The Forge of Vulcan’ by Michael Sweeney. The whole concert finished with ‘Star Wars: The Last Jedi’ by John Williams and I was blown away by the wide variety of abilities being able to come together to create such a breath-taking wall of sound.

Days like these are inspirational and the children return full of ideas, new playing techniques and a zest for massed ensemble playing. A non-musical highlight of course is the selection of treats that they return with from the tuck shop!

As always, the children behaved very well and were a credit to the school. A Special mention must go out to first-timers Isaac M, Albert C, Alex P, Xander C and Raffy L. Well done to all involved in what was a memorable day!

Year 7 spent a glorious Thursday morning exploring part of the beautiful North Norfolk coastline. The geographers were learning about the dynamic character of our local coast as part of their unit of work about coastal erosion and flooding. 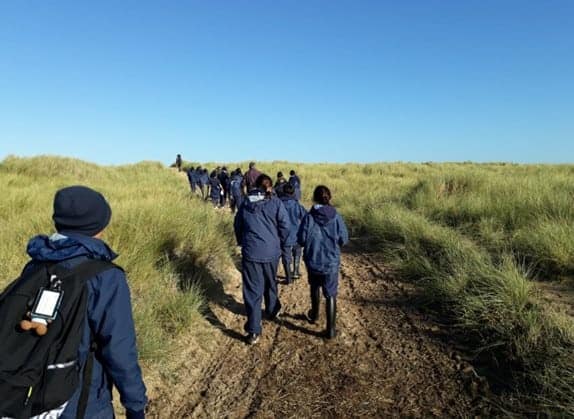 The pupils started the day with a boat trip out to Blakeney Point. This was a great opportunity to see how The Point is continuously changing through the process of longshore drift and understand why this reserve is internationally recognised. 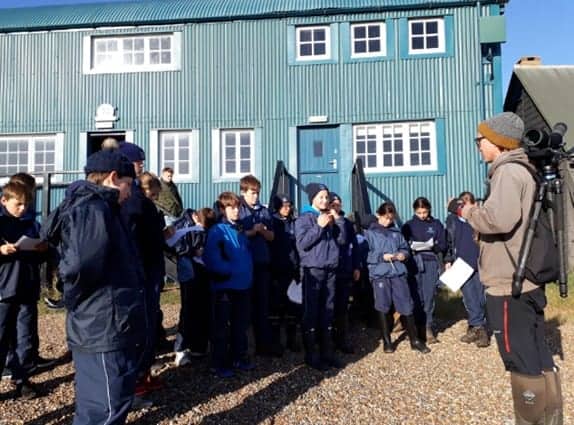 Head of Geography, Mr King, said: “We have so many great examples on our doorstep and geography should be about getting out to explore and investigate these topics. We also enjoyed meeting the National Trust and finding out about how they manage this area before we finished with some seal spotting.” 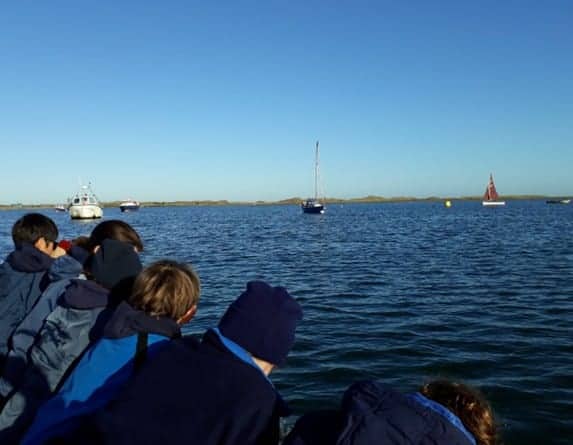 On Tuesday Beeston Hall drove to Oakham for yet another massed instrumental day but this time we had the added bonus of taking some of our senior singers. The theme of the day was ‘Best of Broadway’ and consisted of the singers and instrumentalists being split into two groups and then coming together at the end for an astounding symphonic style finale of ‘You’ll never walk alone’ from Carousel. 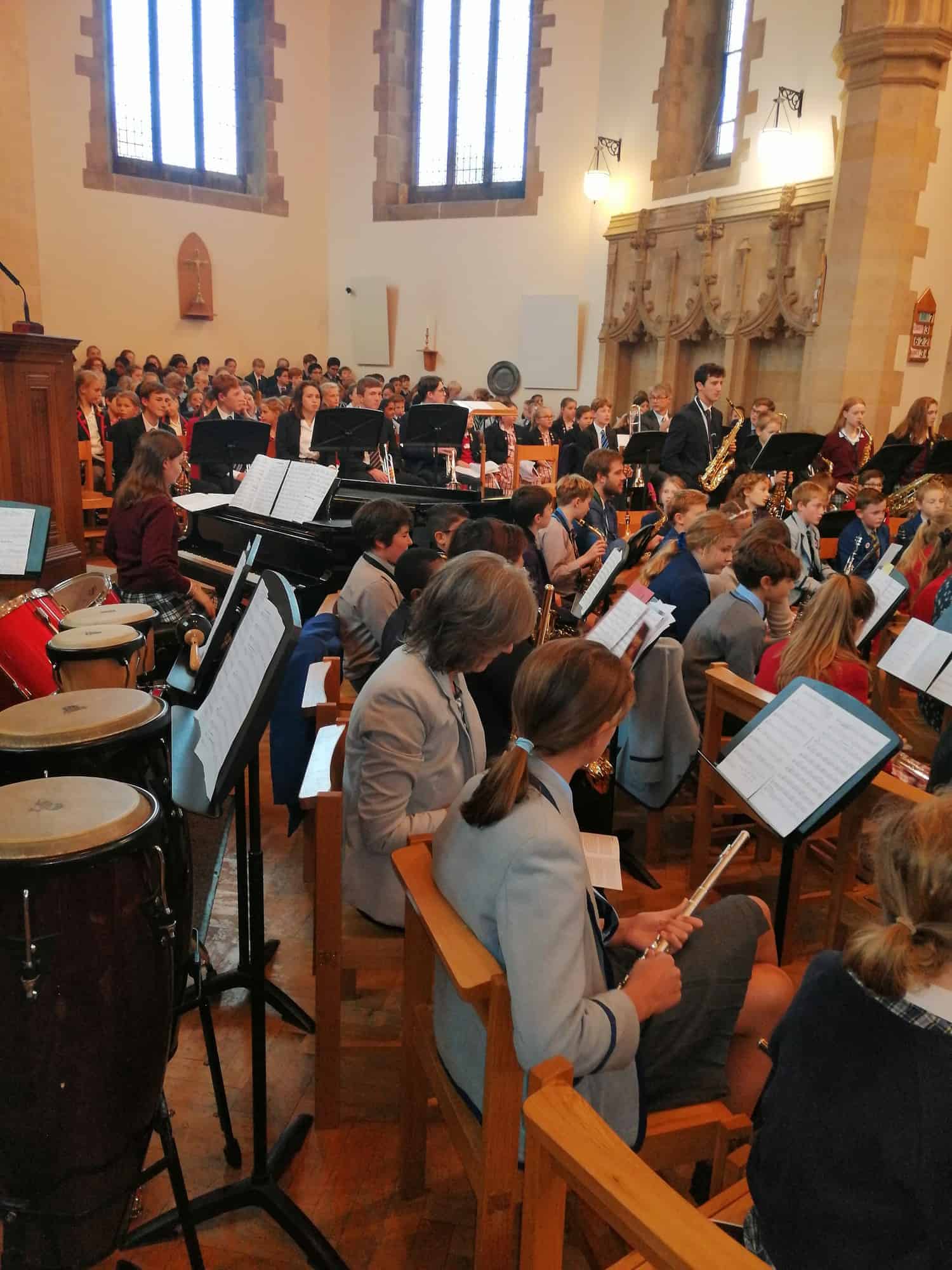 The Woodwind, Brass and Percussion worked hard to prepare music from three Broadway classics: The lion King, Les Misérables, and the Phantom of the Opera. Our singers were quite the ‘revolting’ children when performing a well-known favourite from Matilda and also sang songs from Wicked and Westside Story!

The singers were prepared by the enthusiastic Director of Music, Peter Davis, whilst the instrumentalists were directed by the Head of Brass and Percussion, Steve Foster and the Head of Woodwind, Keith Slade. We were entertained by Oakham’s own Big band and Chamber choir who were all fantastic.

Our children all flourished throughout the day representing Beeston in not only their talent but also their exemplarily behaviour. Alongside the fantastic music making, the main highlight of the day was the delicious hot lunch that we were able to tuck into and the ever-flowing amount of snacks and refreshments. 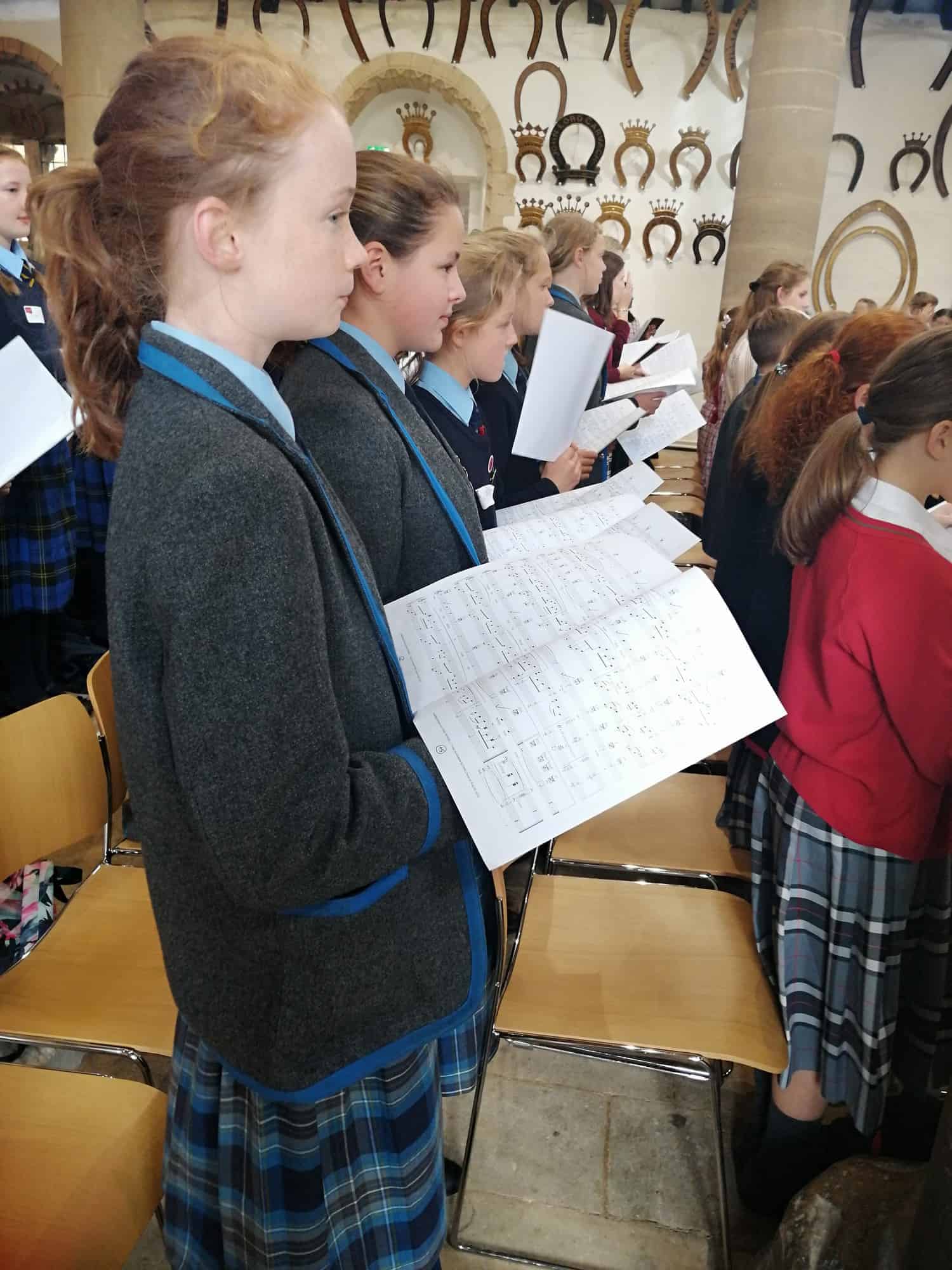 The children seemed so very inspired by the day that they decided to write a ‘Rap’ about their day at Oakham and are keen to perform it in the dining hall one day… Watch this space!

On Monday 7th October our U13 and U11 Swimming teams took part in their first gala of the year against Langley Prep. This was a particularly fast paced event with plenty of races packed into a small pool.

Special mention must go to the following for winning their individual events; Isaac B (Freestyle and backstroke), Olivia B (Freestyle), Aurelia S (Freestyle), Romilly H (Breastroke) and India B (Individual medley). However, everyone should be congratulated on their determination in all the relay races.

Whilst we narrowly missed out on the trophy this time, it was an excellent start to the year for all our swimmers and we look forward to next weeks gala at Glebe House.

Year 3 Trip to The Mo Museum: 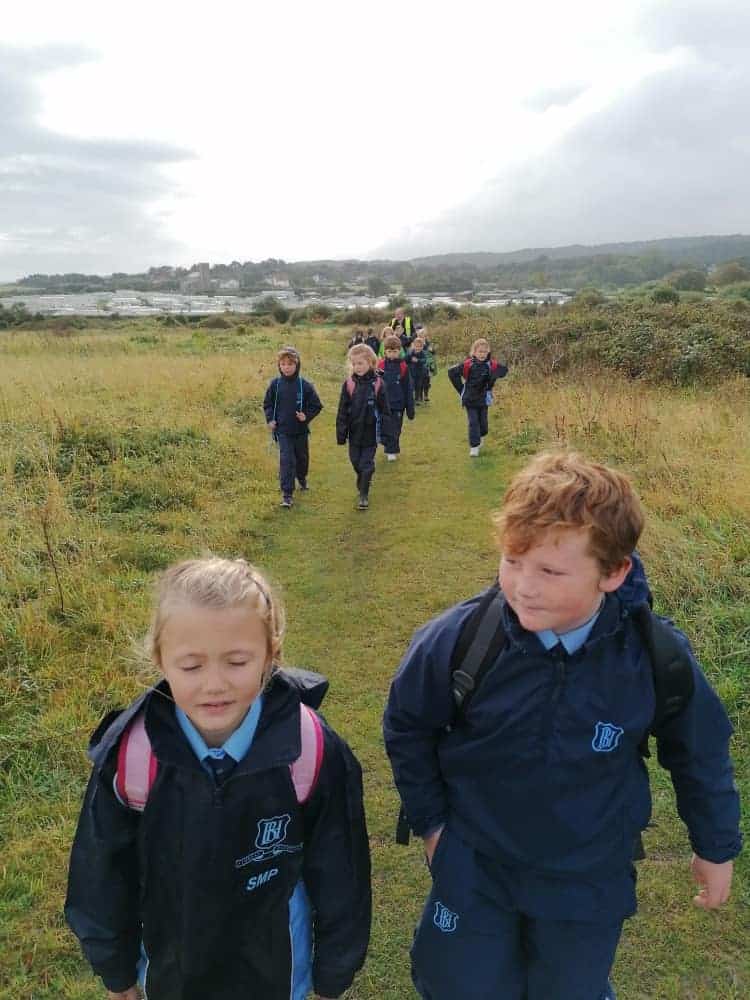 Year 3 had a very informative morning on Tuesday with our walk over Beeston Bump and subsequent trip to the Sheringham ‘Mo’ Museum.  With a somewhat drizzly beginning, the sun broke through just as we approached the bump which meant that we were able to survey the surrounding land and pick out some key human and physical features.  We also kept a close eye out for any interesting wildlife and the children were fascinated by the antics of a kestrel hovering over the bump in search of its next meal.  As we followed the promenade into Sheringham, the children witnessed the full physical force of the waves in action, with us having to stay as close to the beach huts as possible to avoid getting a soaking!

Once at the museum the heavens opened, so we quickly found refuge in the museum’s viewing room where we could continue to observe the sea from a safe, dry spot.  We were treated to a wonderful morning discovering information about Sheringham’s growth and development as well as some fascinating stories about local people, with a traditional wash day demonstration by ‘Mrs Pegg’ being a highlight. 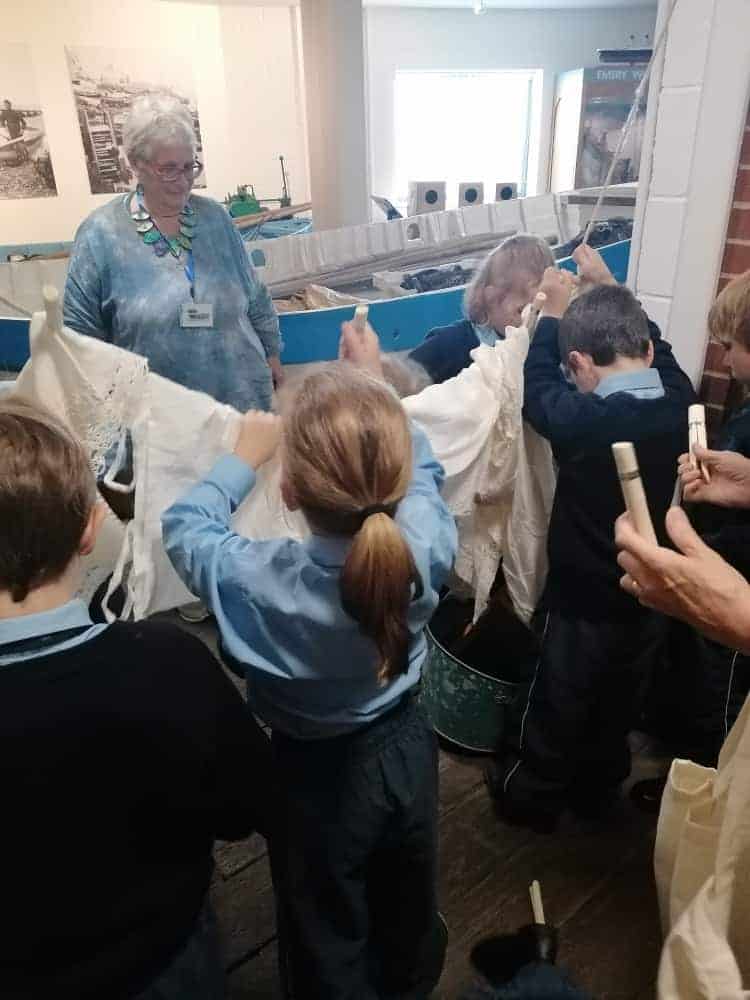 We were lucky enough to have most of the museum to ourselves so the children had an excellent opportunity to explore the exhibits independently.  An excellent morning was topped off by a surprise minibus ride home, with Mr Cole coming to our rescue to collect us from the museum.  I wonder if your children can explain to you what key factor turned Sheringham from a small fishing settlement to the town it is today?

Around the World Day:

On Wednesday 24th September, ‘Around The World Day’ was held at Beeston, based around the theme of the Rugby World Cup. 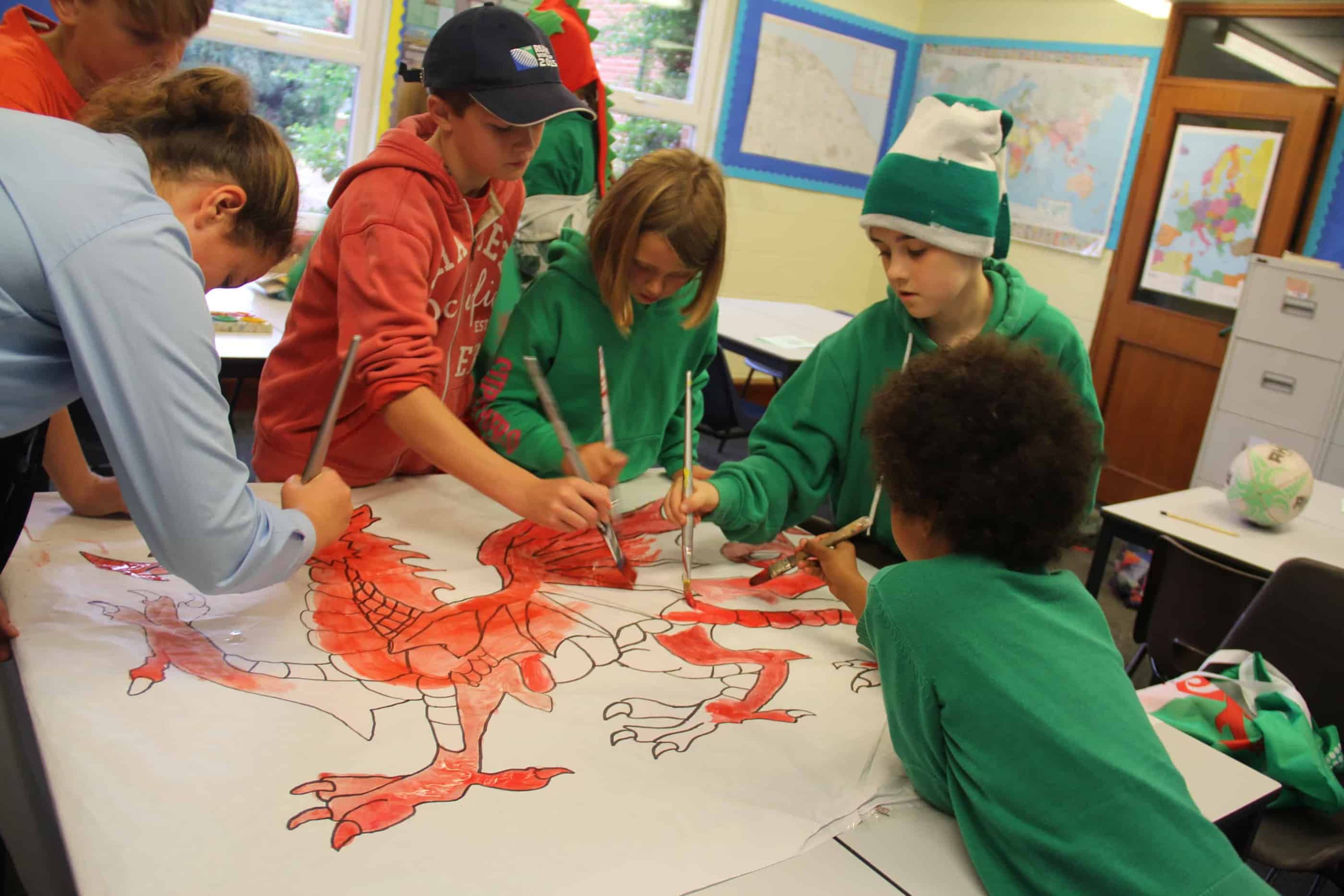 In the Prep School, the day started with an informal assembly where we were able to gain our first look at some of the fantastic costumes and outfits worn by the children and where we discussed the themes of teamwork and why it is important to celebrate different cultures and languages.

Throughout the day, all the children were asked to complete a research session about their ‘country’ and to reinterpret the information available either online or from books in the Library. All pupils also took part in a tablecloth decorating session, and the three that deserved a special mention from Mr de Falbe and Mrs Morton were Japan, Wales and England. Well done to everyone on their efforts – some time was spent at the end of the day allowing us all to look at the children’s work and to take in everything that had been discovered, as well as the collation of citizenship merits, through the Beeston Hall passports. 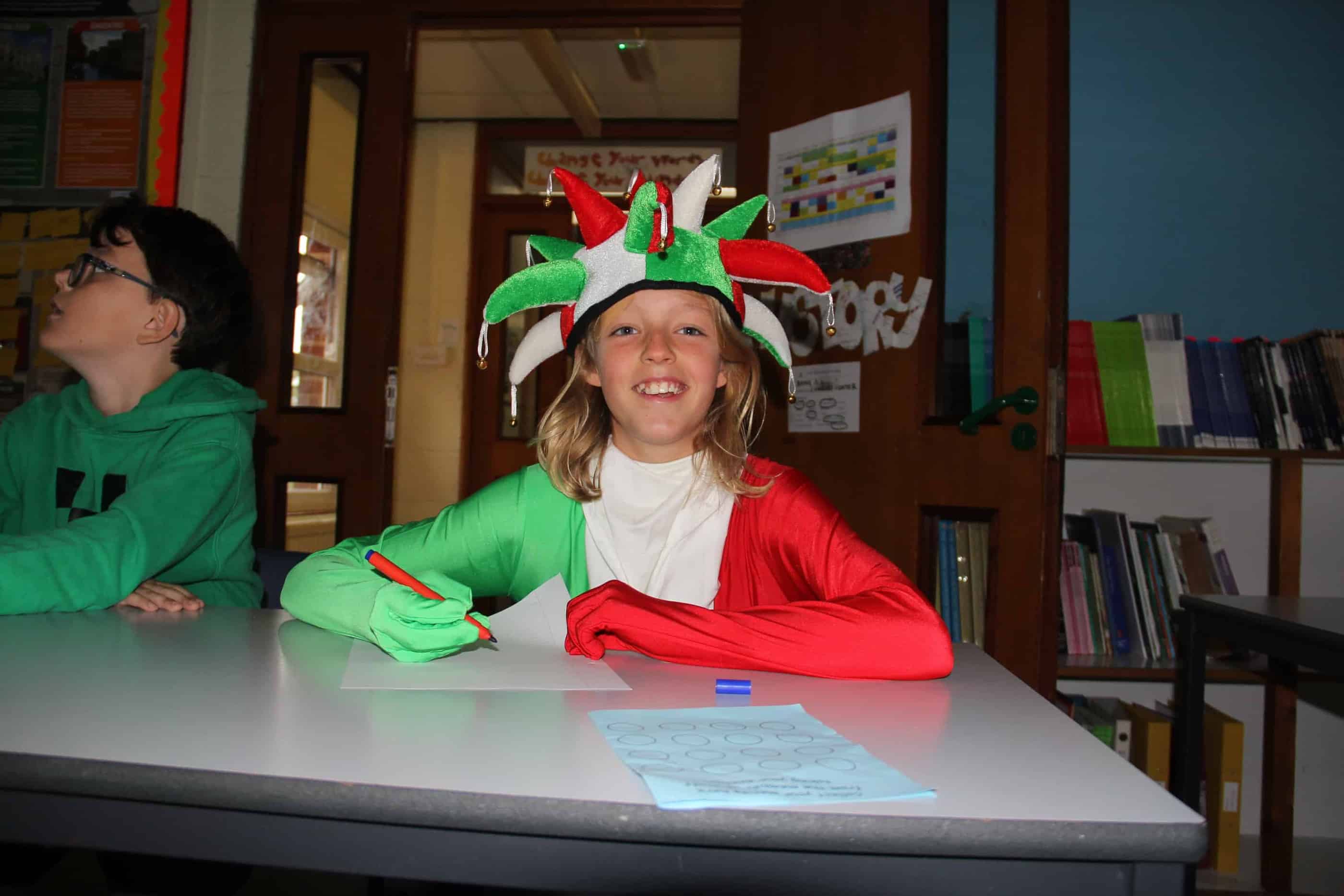 The third session that everyone took part in was dance, lead brilliantly by Millie and Jas from Marlene’s School of Dance. Millie, a former pupil at Beeston, certainly kept the children active, and Miss Power, who accompanied the children in all of the sessions clocked up over 17,000 steps on her activity tracker! 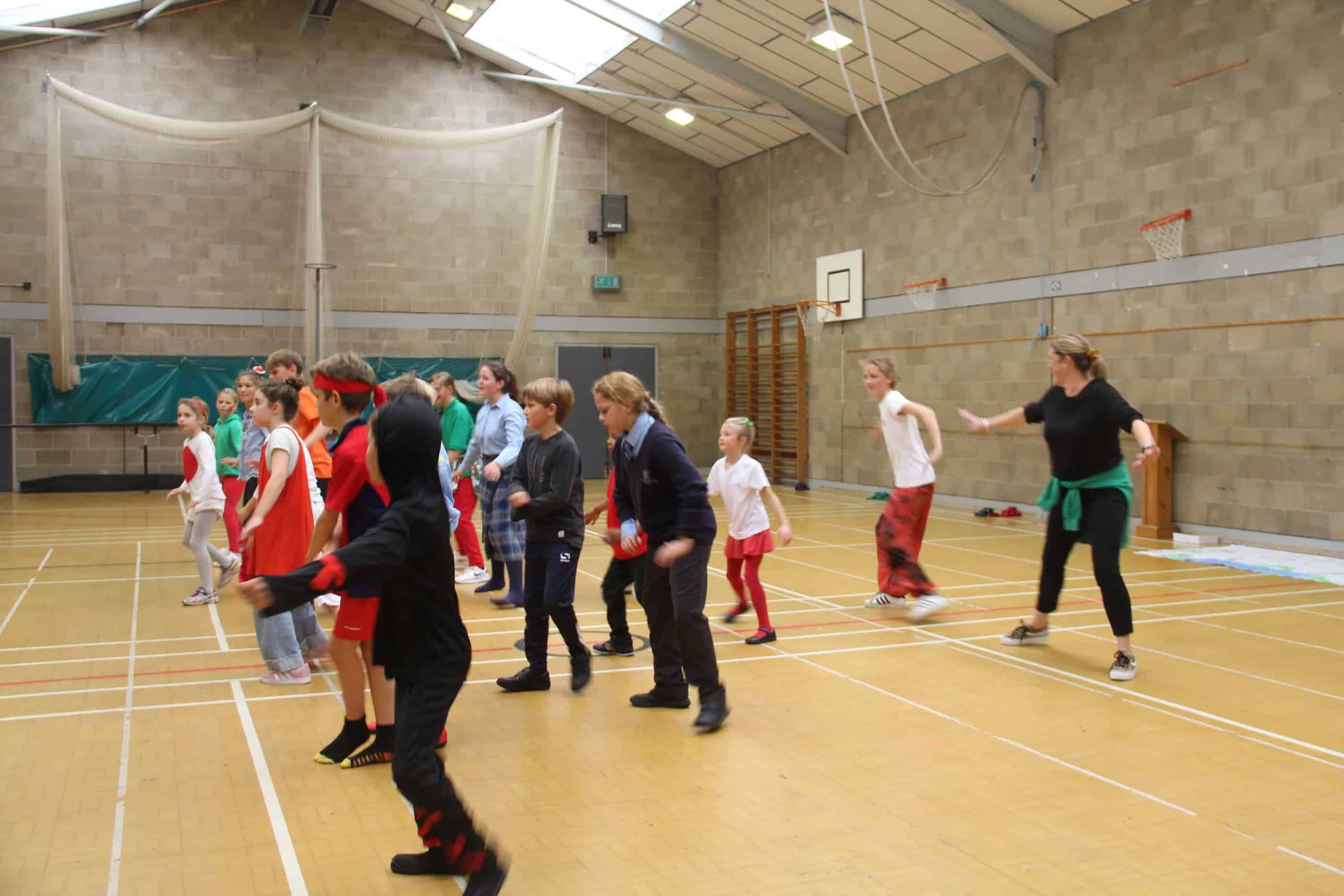 As well as this, sessions over the course of the day included African Drumming, The Highland Games (with weather to suit, at times), German Language and Food Tasting, Yoga, Mandala Making, Ireland, Badge Making, Pétanque, Futsal (sadly, without the Brazilian weather), Iceland and Greenland, the fascinating session on Beekeeping lead by Mr Turner, and Menu Design run by Mrs Raison. I would like to take the opportunity to thank my colleagues for their effort, as well as the catering team for accommodating our needs for the changes at lunchtime, and the detail and good humour put in to preparing these sessions. 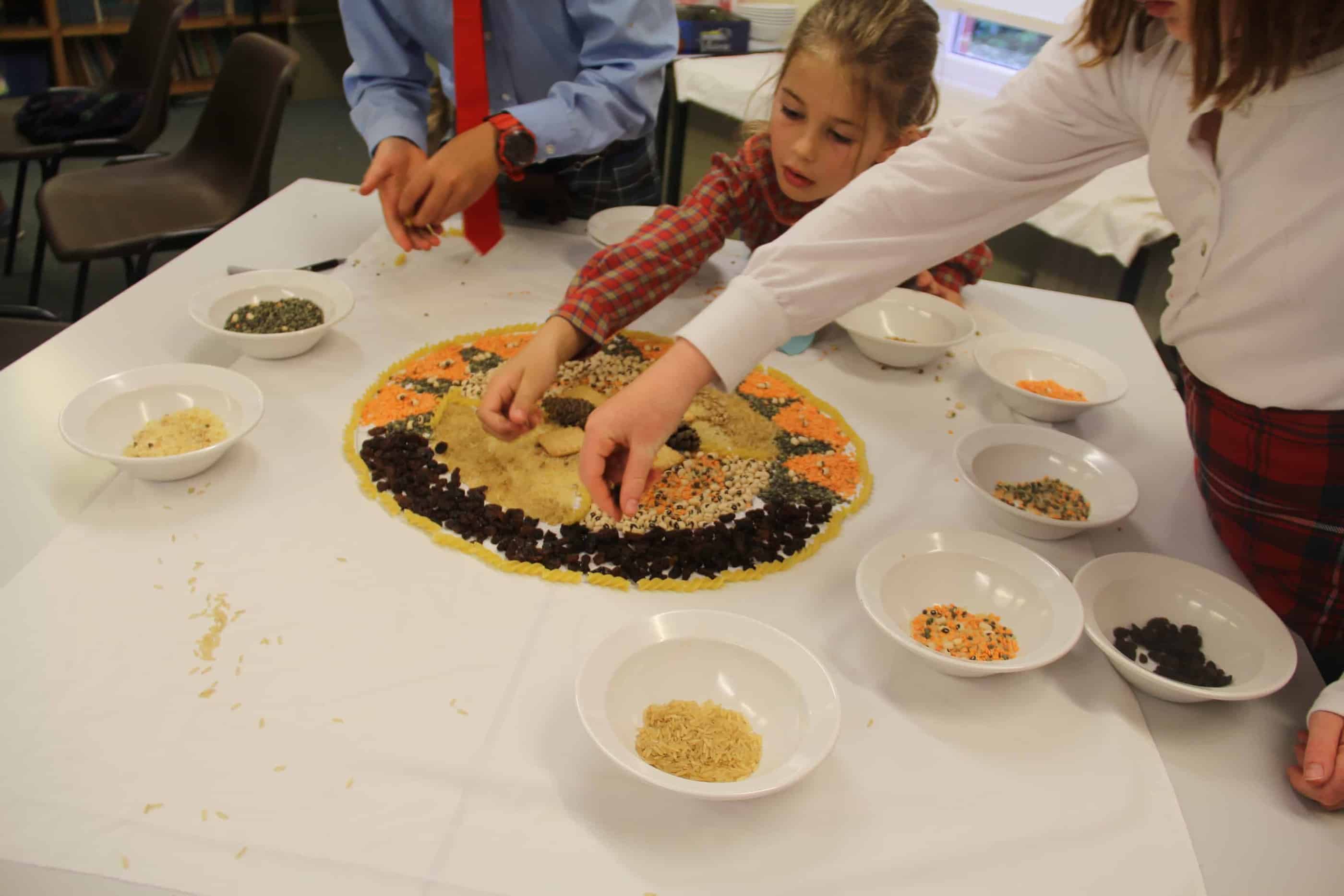 Finally, I would like to thank our parents for their contribution to the day – the Beeston spirit was very much in evidence and made the day a pleasure to organise.

Year 4 truly lived the life of a Victorian child at the superbly run Great Cressingham Victorian School on Monday 23rd September, owned by Sally North who played the part of the main teacher tremendously well. The day was focused on living as a Victorian child with spelling and arithmetic lessons, using slate and rags to record and wipe clean their workings, reciting genuine poetry, singing songs as well as drawing authentic specimens whilst sitting at genuine desks in the extraordinary school building with original features and appliances, including displays and objects from the era. 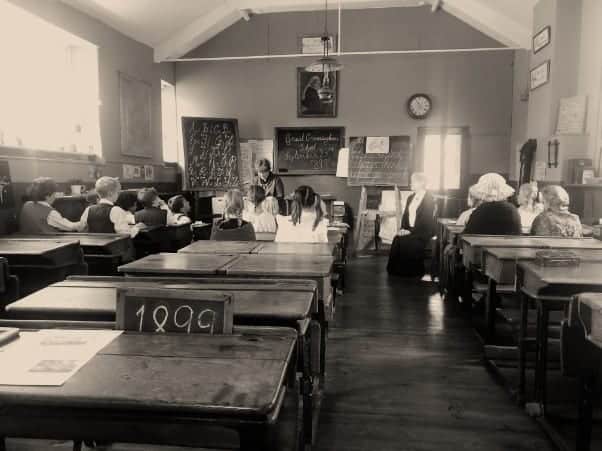 The children also played with beautifully preserved hoops, skipping ropes and spinning tops at breaktime and used the outside toilets before washing their hands with carbolic soap and cold water to extend their understanding of life in 1899. In the afternoon, the children practised the messy business of writing with pen and ink and blotting their meticulously well scribed handwriting with care which is trickier than one may think. 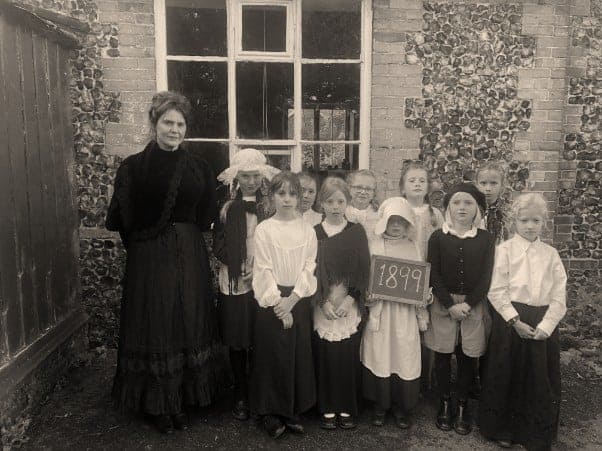 The boys sharpened their slate pencils on the outside wall where you can see the scars of more than a century of the same activity, connecting the boys directly with the past and creating a continual thread between now and then. The girls practiced their sewing skills and filled their individual bags with handpicked lavender from the estate. 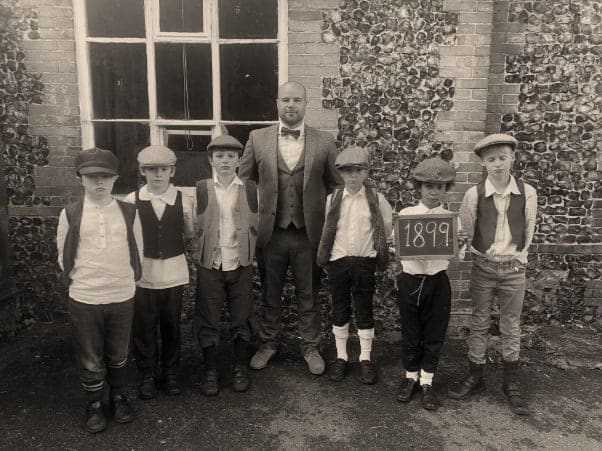 The aim was for the children to leave the school knowing what it felt like to be a Victorian child and to experience it just as they would have. This was the most inspiring visit that will not be forgotten. 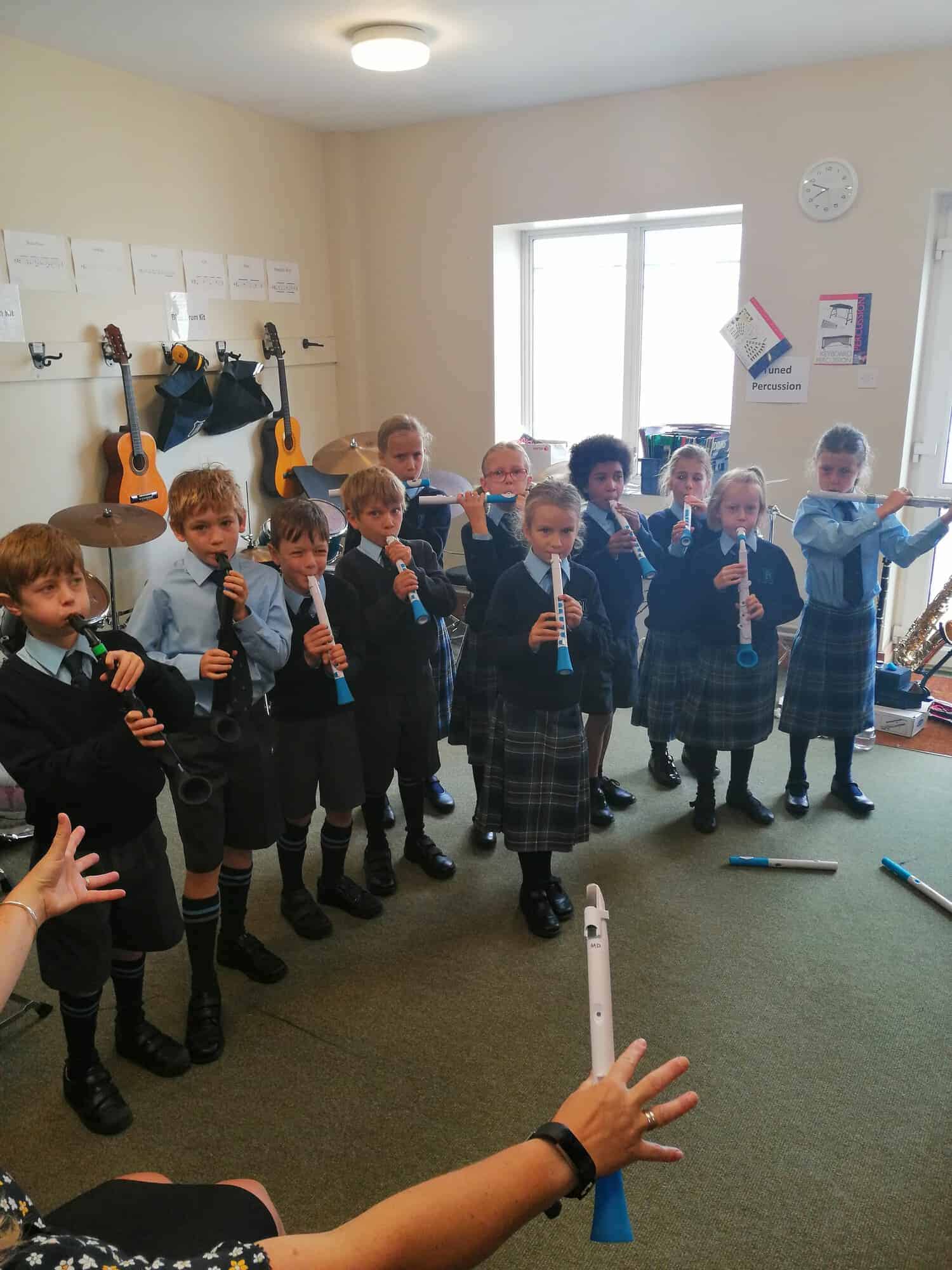 Meet the instruments! Children from Reception to Year 4 listened to performances by our nine, talented, peripatetic music staff, including ‘Three Irish Airs’ by Edward Huws Jones and the ‘Greatest Showman. Mrs Casey explained why music is such a vital skill to have, after which the children were sent off in groups for the fun to began! Brass, woodwind and stringed instruments were available to listen to and to try and play. The highlight for me was watching the children in Reception attempting to play the grandfather of the strings, the double bass. 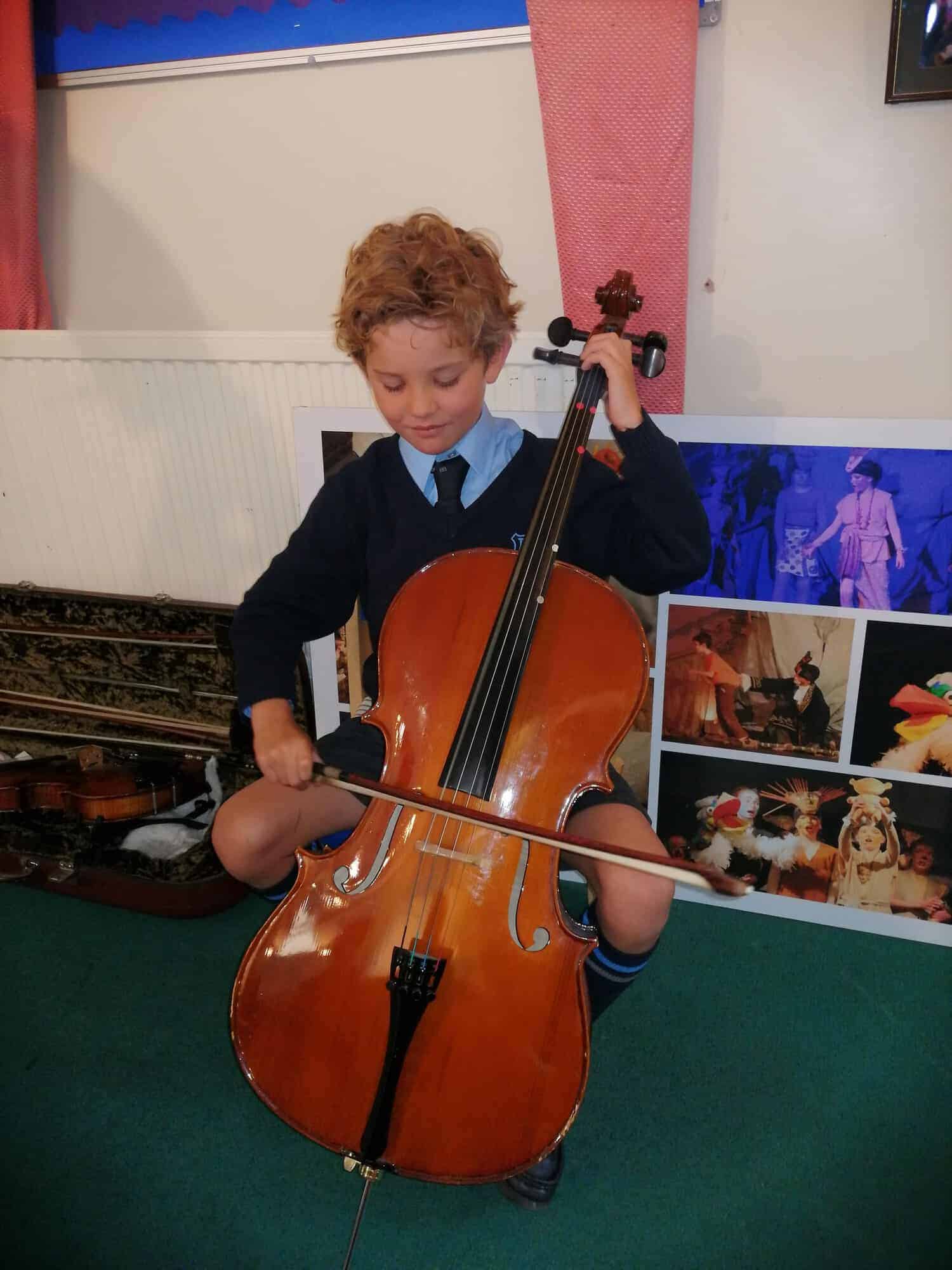 We hope this instils a lifelong interest and enthusiasm for the subject or a particular instrument. There is so much to choose from and I believe everyone has ‘their instrument’. The taster day mini-plastic instruments can be put in the dishwasher and even played in the bath! I cannot wait to see how many children sign up for instrumental lessons and I look forward to having them in Pre-Prep Philharmonic and the new Junior Orchestra!

Any cookies that may not be particularly necessary for the website to function and is used specifically to collect user personal data via analytics, ads, other embedded contents are termed as non-necessary cookies. It is mandatory to procure user consent prior to running these cookies on your website.